Own a Piece of League History! 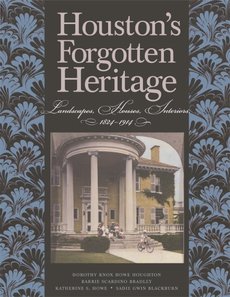 Houston’s Forgotten Heritage traces the evolution of Harris County’s landscape, houses, interiors and domestic life from the early 1820s to 1914 when the opening of the Houston Ship Channel ushered in modern Houston. Richly illustrated with 275 photographs of houses and gardens which have long since disappeared, it depicts homes where the foundations were laid for much of the cultural life enjoyed in Houston today. Houston’s Forgotten Heritage received the Citation Award from the San Antonio Conservation Society in 1992.

Dorothy Knox Howe Houghton, sustaining League member, is a direct descendant of Jane Birdsall and John Richardson Harris, for whom Harris County is named. She is a graduate of Bryn Mawr College and holds a Master’s degree from the University of Texas at Austin. Dorothy Knox is also the author of The Houston Club and Its City: One Hundred Years.

Barrie Scardino Bradley, sustaining League member, has served as executive director of the Houston chapter of the American Institute of Architects, as editor of Cite: The Architecture and Design Review of Houston, and as architectural archivist of the Houston Metropolitan Research Center at the Houston Public Library. She is also the author of several publications including Houston’s Hermann Park: A Century of Community.

Sadie Gwin Blackburn, sustaining League member, is a direct descendant of Harvey Allen, a brother of the founders of Houston. She is a graduate of Sweetbriar College and holds a degree from Rice University. She served as president of the Garden Club of America while writing a portion of Houston’s Forgotten Heritage.

Katherine S. Howe, a sustaining League member, is a graduate of Connecticut College and the Cooperstown Program at SUNY, Oneonta.  She is the former director of Rienzi, The Museum of Fine Arts, Houston collection of European decorative arts and of the Brown Foundation Fellows Program, a residency program at the Dora Maar House in Menerbes, France.  A specialist in nineteenth-century American and 18th-century European decorative arts, she is best known as a co-author of Herter Brothers: Furniture and Interiors for a Gilded Age.

All orders placed via the Junior League website will be shipped to the purchaser and will be subject to shipping fees.  The Junior League offers ground shipping via USPS within the 48 contiguous states. To avoid incurring shipping fees, you may purchase your books in person from The Pantry at the League building, which is open Tuesday through Saturday between 9:30 a.m. and 3 p.m.

Thank you for your support of the Junior League of Houston and its mission.

The League provides trained volunteers and funding to 34 community projects. In addition, the League’s community outreach efforts include Community Assistance Grants, Emergency and Resource Contingency Grants, Community Collaborations and Outside Board Representatives. Further, the League’s extensive training and education program cultivates a lifetime of civic service, preparing members to serve as agents of change in the Houston community well beyond their active membership years.